Grenada is an island country in the southeastern Caribbean Sea consisting of the island of Grenada and six smaller islands at the southern end of the Grenadines island chain. It is located northwest of Trinidad and Tobago, northeast of Venezuela and southwest of Saint Vincent and the Grenadines. Its size is 344 square kilometres (133 sq mi), and it had an estimated population of 110,000 in 2012. Its capital is St. George’s. Grenada is also known as the “Island of Spice” due to its production of nutmeg and mace crops, of which it is one of the world’s largest exporters. The national bird of Grenada is the critically endangered Grenada dove.

Before the arrival of Europeans to the Americas, Grenada was inhabited by the indigenous Arawaks and later by the Island Caribs. Christopher Columbus sighted Grenada in 1498 during his third voyage to the Americas. Although it was deemed the property of the King of Spain, there are no records to suggest the Spanish ever landed or settled on the island. Following several unsuccessful attempts by Europeans to colonise the island due to resistance from the Island Caribs, French settlement and colonisation began in 1650 and continued for the next century. On 10 February 1763 Grenada was ceded to the British under the Treaty of Paris. British rule continued, except for a period of French rule between 1779 and 1783, until 1974. From 1958 to 1962 Grenada was part of the Federation of the West Indies, a short-lived federation of British West Indian colonies. On 3 March 1967, Grenada was granted full autonomy over its internal affairs as an Associated State. Herbert Blaize was the first Premier of the Associated State of Grenada from March to August 1967. Eric Gairy served as Premier from August 1967 until February 1974.

Independence was granted on 7 February 1974, under the leadership of Eric Gairy, who became the first Prime Minister of Grenada. In March 1979, the Marxist–Leninist New Jewel Movement overthrew Gairy’s government in a coup d’état and established the People’s Revolutionary Government (PRG), headed by Maurice Bishop as Prime Minister. On 19 October 1983 hard-line Deputy Prime Minister Bernard Coard and his wife Phyllis, backed by the Grenadian Army, led a coup against the government of Maurice Bishop and placed Bishop under house arrest. Bishop was later freed by popular demonstration and attempted to resume power, but was captured and executed by soldiers. On 25 October 1983 forces from the Barbados-based Regional Security System (RSS) and the United States invaded Grenada in an operation code-named Operation Urgent Fury. The invasion was highly criticised by the governments of Britain, Trinidad and Tobago and Canada, along with the United Nations General Assembly. Elections were held in December 1984 and were won by the Grenada National Party under Herbert Blaize who served as prime minister until his death in December 1989.

On 7 September 2004, after being hurricane-free for 49 years, the island was directly hit by Hurricane Ivan, which damaged or destroyed 90% of the island’s homes. On 14 July 2005 Hurricane Emily struck the northern part of the island, causing an estimated USD $110 million (EC$297 million) worth of damage.

English is the country’s official language, but the main spoken language is either of two creole languages (Grenadian Creole English and Grenadian Creole French) which reflects the African, European, and native Indian heritage of the nation. The creoles contain elements from a variety of African languages; Grenadian Creole, however, is also influenced by French.

The indigenous languages were Iñeri and Karina (Carib).

The Eastern Caribbean Dollar (EC$) is the local currency in Grenada. It is advisable to exchange currency at the banks, as the most favourable exchange rates may not be obtained elsewhere. 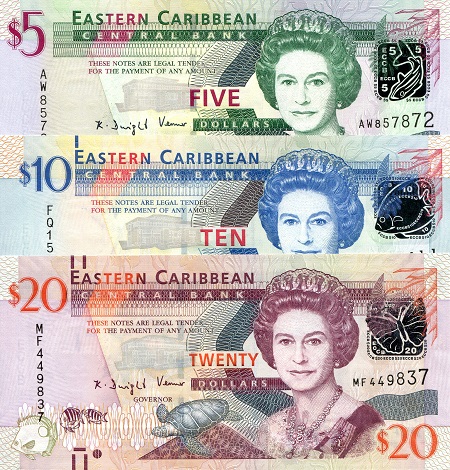 The island of Grenada is the largest island in the Grenadines. Smaller islands are Carriacou, Petit Martinique, Ronde Island, Caille Island, Diamond Island, Large Island, Saline Island, and Frigate Island. Most of the population lives on Grenada, and major towns there include the capital, St. George’s, Grenville and Gouyave. The largest settlement on the other islands is Hillsborough on Carriacou.

The islands are of volcanic origin with extremely rich soil. Grenada’s interior is very mountainous with Mount St. Catherine being the highest at 840 m (2,760 ft). Several small rivers with beautiful waterfalls flow into the sea from these mountains.

The climate is tropical: hot and humid in the rainy season and cooled by the trade winds in the dry season. Grenada, being on the southern edge of the hurricane belt, has suffered only three hurricanes in fifty years.

St. Georges University has rapidly expanded in recent years, and has a major economic impact, particularly in southern portions of the island. While some of its approximately 5,000 students are from Grenada, including many undergraduates, and many medical students serve rotations off of the island, the majority of students are from other countries and bring substantial revenue to the island while studying there. St. Georges University is among the island’s largest employers, and students patronise many off-campus landlords and other businesses.

St. Georges University is one of the Organisation of American States (OAS) Consortium of Universities according to the OAS webpage.

Although French influence on Grenadian culture is much less visible than on other Caribbean islands, surnames and place names in French remain, and the everyday language is laced with French words and the local dialect, or Patois. Stronger French influence is found in the well seasoned spicy food and styles of cooking similar to those found in New Orleans, and some French architecture has survived from the 1700s. Island culture is heavily influenced by the African roots of most of the Grenadians, but Indian and Carib Amerindian influence is also seen with dhal puri, rotis, Indian sweets, cassava and curries in the cuisine.

The “oildown” is considered to be the national dish. The name refers to a dish cooked in coconut milk until all the milk is absorbed, leaving a bit of coconut oil in the bottom of the pot. Early recipes call for a mixture of salted pigtail, pig’s feet (trotters), salt beef and chicken, dumplings made from flour, and provision like breadfruit, green banana, yam and potatoes. Callaloo leaves are sometimes used to retain the steam and for extra flavour.

Soca, calypso, and reggae set the mood for Grenada’s annual Carnival activities. Over the years rap music became famous among Grenadian youths, and there have been numerous young rappers emerging in the island’s underground rap scene. Zouk is also being slowly introduced onto the island. The islanders’ African and Carib Amerindian heritage plays an influential role in many aspects of Grenada’s culture.

As with other islands from the Caribbean, cricket is the national and most popular sport and is an intrinsic part of Grenadian culture. The Grenada national cricket team forms a part of the Windward Islands cricket team in regional domestic cricket, however it plays as a separate entity in minor regional matches, as well having previously played Twenty20 cricket in the Stanford 20/20.

An important aspect of the Grenadian culture is the tradition of story telling, with folk tales bearing both African and French influences. The character, Anancy, a spider who is a trickster, originated in West Africa and is prevalent on other islands as well. French influence can be seen in La Diablesse, a well-dressed she-devil, and Ligaroo (from Loup Garoux), a werewolf.

Flights at the Maurice Bishop International Airport connect with other Caribbean islands, the United States, Canada, and Europe. There is a daily fast ferry service between St. George and Hillsborough.